North Shore Towing





“
I had a car fire on the Edens. They came so fast and were courteous and thoughtful. They were also extremely reasonable in price.
Heather A., Jun 12, 2021

North Shore Towing





“
Reasonably priced compared to others. Extremely professional and detail oriented in taking my information down and having tow truck show up on time that was quoted.
Fawad F., Jun 9, 2021

North Shore Towing





“
The tow truck driver was friendly and very helpful. He took care of us and had us laughing as he did so. Would use again and highly recommend!!
Keith B., Jun 7, 2021

North Shore Towing





“
This people are very friendly and very reasonable and not like the others who wanted to rake me. Especially the driver super super cool and dog friendly. Definitely took their card for the next time....
Greg G., May 29, 2021

North Shore Towing





“
Driver arrived readout quickly, even helped me fig out what was wrong with the car!
Angela J., May 28, 2021

North Shore Towing





“
Driver called to let me know what to expect, took care of everything while I worked from the car. Thank you very much!
Avery C., May 25, 2021

North Shore Towing





“
I locked my keys in my truck. These guys were super quick and efficient, yea it was 75 bucks but time is money. I was back in my truck under 30 min from when I locked them in there. Dispatch and drive...
Jonathon G., May 15, 2021

North Shore Towing





1,660 Reviews
Powered by Whiterail
Disclosure
The reviews displayed may or may not be a complete set. Reviews may be removed if they:
i. Are abusive. An abusive review or comment is one that makes personal attacks, threatens, or harasses others, or uses profanity.
ii. Violate privacy. Reviews that mention specific names of individuals or personal information in a manner that is inappropriate and/or unrelated to the performance of the service rendered are subject to removal.
iii. Are not from a current customer.
iv. Contain material falsehoods.
v. Are deemed inappropriate.
To encourage all feedback, positive or otherwise, an equal incentive for reviews, regardless of rating, may have been provided to the reviewer.
Google reviews provided via APIs https://www.google.com/+/policy/embedded-content.html

Our the North Shore Tow Company got a call to recover a damaged trailer on I294 on April 30.  Typically, trailer frames can withstand a great deal of jostling and pressure. This particular trailer frame had given way and then detached from a one ton dually, pulling it to the ground.  We arrived at the scene on I294 just south of Dempster to find the one ton truck and trailer in the left hand shoulder. Cars were rushing by with a great deal of speed. Our tow company specialist, Manuel did some quick work. First, he placed safety cones up to give him some room to work.  He detached the trailer from the truck, being careful with the damaged frame. In less then 20 minutes he winched the trailer onto the flatbed and secured it down with straps.

The best news is how the North Shore Tow Company continued with the delivery. Our driver took the trailer with all the contents loaded inside all the way to its Milwaukee destination. Good job Manuel.

Trailer with straps locking down trailer for tow company 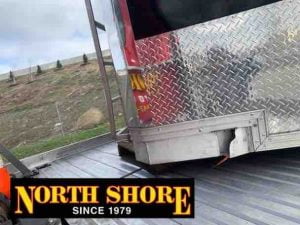 Details of of Tow Company After Recovery of Damaged Trailer